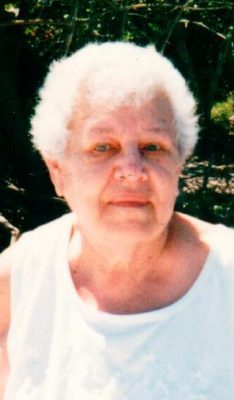 Mabel K. Samuels Calloway, 93, of Frankfort, Ind., died at 7:45 p.m. October 23, 2017 at I.U. Health Frankfort Hospital.  She was born September 9, 1924 in Clinton County to Earnest & Laura (McAhren) Harris. She married William Samuels on November 2, 1940 and he preceded her in death on November 15, 1983.   She then married Robert L. Calloway on October 14, 1984 and he preceded her in death on March 5, 2003.  Mrs. Calloway attended school in Pickard and was a lifelong Clinton County resident.  She had worked at Ayres, Biddles, Frankfort Cigar Factory, Kirklin Cleaners, Del Monte and Aldens, retiring in 1978.  Mabel was a member of the Woodside Christian Church.  She was an avid mushroom hunter, enjoyed fishing and country music.  She also enjoyed attending county music events with her special friend Carol Geske.

Visitation will be 4-7 p.m. Thursday, October 26, 2017 at Goodwin Funeral Home, 200 S. Main St., Frankfort. Funeral services will be 10:30 a.m. Friday, October 27, 2017 at the funeral home, her grandson, Gary George will officiate. Burial will be in Oak Hill Cemetery, Kirklin, Ind. Memorial donations may be made to the Clinton County Humane Society.

In addition to her parents and her husbands, she was preceded in death by a son, Jack Samuels, 2 brothers, Kenneth Harris & Samuel Harris, sister, Lmae Tull and a grandson, Billie George.