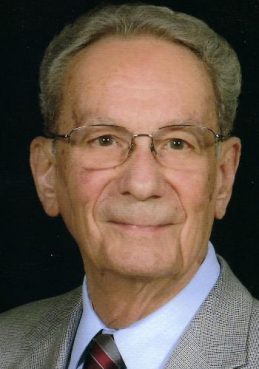 Mr. Woods was a 1936 graduate of Princeton High School, and a 1948 graduate of Purdue University with a B.S. degree in Electrical Engineering. A veteran of the U.S. Army Air Corps, he served from July 10, 1942 – January 20, 1946, during WWII.  He was a tactical recon pilot in the 107th Tactical Reconnaissance Squadron in the European Theatre.    He moved to Frankfort in 1956.  Joseph worked for P.R. Mallory Controls as an electrical engineer, retiring on June 30 1986.  He was an FCC Amateur Radio Operator Advanced License, and in the PI Kappa Alpha Fraternity at Purdue University.  Joseph held a commercial pilot rating following the war.  He enjoyed designing and building amateur radios.

Visitation will be 10-11 a.m. Saturday, February 9, 2019 at Wesley Manor Chapel, 1555 N. Main St., Frankfort. Funeral Celebration will begin at 11 a.m. at the chapel. Entombment will be in Green Lawn Mausoleum. Memorial donations may be made to Wesley Manor or St. Matthews United Methodist Church.

In addition to his parents and his wife of 54 years, he was preceded in death by a daughter, Emily S. Shipper, brother, William A. Woods and a sister-in-law, Marilyn Woods.