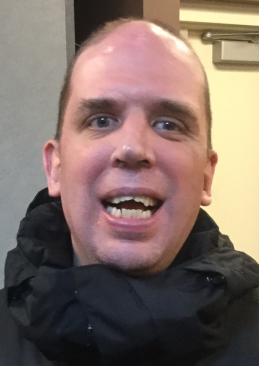 McDonalds lost a loyal customer at 6:55 pm on April 23, 2019.  Jason, age 45, could always find room for his favorite hamburger, french fries and a coke even after a big holiday meal.  We have decided to be joyful about him having a full life rather than be sad about his death.

While he attended Clinton Prairie schools we tried to give Jason a normal childhood filled with church, ballgames, vacations and family time.  But the greatest gift as parents that we gave Jason was the independence to live his own life.  Even with full-time supportive care in his own home, Jason made friends and enjoyed his own activities, such as his days spent at the Day and Community Sycamore Services.  With the love of singing, Jason’s favorite outing was participating in the Trangram Special Needs Chorus.  He may not have been the best singer, but his voice was the most joyous.  Jason was blessed with good health his whole life but his body could not heal from a recent surgery.  Heaven just got a new greeter singing, “Happy Birthday” to all who enter.

We are honoring this special man with a memorial service on Monday, April 29, 2019 at 4 p.m. at Goodwin Funeral Home, 200 S. Main St., Frankfort. Reverend Gary Walker will officiate. Calling is one hour prior to the service at the funeral home. Interment will take place at a later date. In lieu of flowers, donations can be made to the Clinton County Humane Society or maybe . . . a trip to McDonalds.