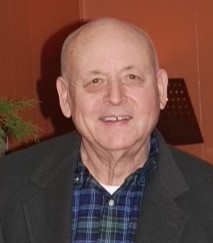 Jim Himmelwright was born in Frankfort, Indiana to parents James C. and Vida (Merchant) Himmelwright. He graduated from Frankfort High School in 1956 where he lettered in tennis and football and was well known for his trumpet playing talent.

Jim attended Purdue University in Lafayette, Indiana where he played on the varsity tennis team, including number one doubles. Tennis remained a strong interest for most of his life. He had a great “American twist” serve that was no small challenge to return, including for his two children, to whom he passed on his love for the game.

In 1961, he married his hometown sweetheart Mary Ann (Miller). He graduated from medical school at Northwestern University in Chicago, Illinois in 1963 and completed his residency training in Albuquerque, New Mexico.  While serving in the US Air Force he was stationed at Maxwell Air Force Base.  Upon completing his military service in 1969, he moved to Opelika where he founded Internal Medicine Associates, the area’s first practice in this field, and one which continues to serve the East Alabama community.  He served on the Board of Directors at EAMC from 1982-2000.

True to his Indiana roots, Jim loved basketball and was a long-time season ticket holder and supporter of the Auburn Tigers (except on the rare occasions they played Purdue).  Jim was also an avid fisherman.  Annual fishing trips to Marco Island, Florida are among his family’s fondest memories, as well as fishing ventures into Canada and Alaska.

Family will receive friends from 1-2 p.m. Thursday, December 3, 2020 at Goodwin Funeral Home, 200 S. Main St., Frankfort. A family graveside service will follow in Green Lawn Cemetery, Frankfort, Indiana. Kelly Kurth will officiate. Out of respect for the health, safety, and comfort of all in attendance, guests will be expected to adhere to current CDC guidelines regarding appropriate social distancing and the wearing of masks. In lieu of flowers, donations can be made to Watoola United Methodist Church, 1370 Lee Road 38, Opelika, AL 36804, to help with their on-going recovery from the tornado damage of March 2019.