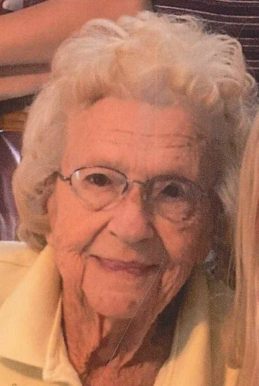 Irene attended school in Beard and graduated from Michigantown High School in 1948.  She was a homemaker and she and Babe owned/operated Davis Fence Co. in Michigantown.  Irene was known by many as the queen of “Frogtown”.  She was a longtime member of Michigantown United Methodist Church.  She enjoyed sewing, golf, bocce ball, and bowling, and loved playing video poker and traveling with her daughter and son-in-law in their motor home.

Visitation will be Noon – until the time of service at 2 p.m. Wednesday, September 15, 2021 at Goodwin Funeral Home, 200 S. Main St., Frankfort.  Funeral services will follow at 2 p.m. at the funeral home.  Burial will be in Green Lawn Memorial Park.

She was preceded in death by her parents; husband; brothers: Reldo, Garland, and Harley Ridenour; sisters: Audrey Meadors and Maxine Sproal; a great-granddaughter; and a great-grandson.