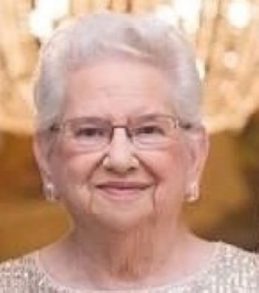 Ike spent most of her life in Frankfort.  She had worked at the Clover Leaf Diner, Indiana Brass, Peter Paul for 17 years and Federal Mogul for 15 years. She was a lover of God, a faithful Christian, and was a member of Woodside Christian Church.  She enjoyed cooking and was especially known for her noodles and chocolate pie.  Ike loved life, her family, friends, and her dog, Coby.  She was known for saying “Now this is livin’”.

Due to the current circumstances facing our Nation, the services will be private with burial in Bunnell Cemetery. A Public Visiting and Celebration of Life will be held at a later date. Goodwin Funeral Home is honored to assist the Scott family. In lieu of flowers, memorial donations may be made to the Clinton County Boys and Girls Club, P.O. Box 103, Frankfort, IN 46041.

In addition to her parents and husband, she was preceded in death by her infant daughter: Sally, 4 brothers, and 2 sisters.