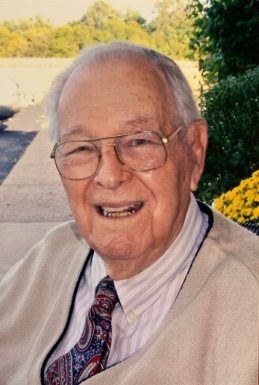 Mr. Hoehn was a 1938 graduate of Gillespie High School in Gillespie, Illinois and attended Blackburn College in Carlinville, Illinois for two years.  A WWII veteran, he served in the U.S. Air Force from 1941 – 1945, first on the island of Trinidad and then on the Island of Guam.

He earned the rank of Eagle Scout at age 17, then following WWII, he worked for the Boy Scouts of America and moved to Frankfort in 1953, where he served as District Executive in Clinton and Boone Counties.  He owned and operated Hoehn Insurance Agency along with Doris until retiring in 1983.  He and Doris enjoyed “wintering” in McAllen, Texas.

Buzz held memberships in the Masonic Lodge, Elks Club, Moose, Veterans of Foreign Wars, American Legion, Frankfort Country Club, and was a lifetime member of the Frankfort Kiwanis Club where he served as President.  He was active in establishing the Clinton County United Way in 1957, where he served as President and Campaign Chairman.  He served as the General Chairmanship for the Clinton County Sesquicentennial in 1980 and as a result was named “1980 Citizen of the Year”.

Buzz was a member of the St. Matthews Methodist Church.

Memorial donations may be made to the Boy Scouts of America.

Visitation will be 1-2 p.m. Friday, February 8, 2019 at Wesley Manor Chapel, 1555 N. Main St., Frankfort.   Funeral Celebration will begin at 2 p.m. at the chapel.  Pastor Deborah Musick will officiate.  Burial will be in Bunnell Cemetery, Frankfort, Indiana.

In addition to his parents and his wife of 69 years, he was preceded in death by his sister Helen Anderson.