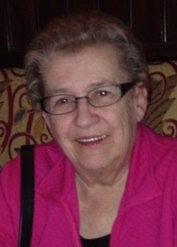 Helen M. Rymek Cotone, 82 of Frankfort, died at 4:32 p.m. September 13, 2017 at I.U. Health, Lafayette, Ind. Born February 3, 1935 in Mazenod, Saskatchewan, Canada, to Michael & Janet (Marszall) Rymek.  She married John J. Cotone in July of 1976 in Chicago, Ill. and he preceded her in death on July 25, 2013.  Helen was a graduate of Gravelbourg High School in Saskatchewan, received her RN Degree from Regina Saskatchewan and her Bachelor’s Degree in Pharmacy from Purdue University in 1997.  She lived in Gravelbourg, Saskatchewan, moved to Chicago in 1958 and then moved to Frankfort, Ind.  She was a RN and a Pharmacist working for Proctor & Gamble in Chicago, Ill.  Helen was a member of the St. Mary’s Catholic Church, Frankfort, Ind.

Services will be held at a later date.