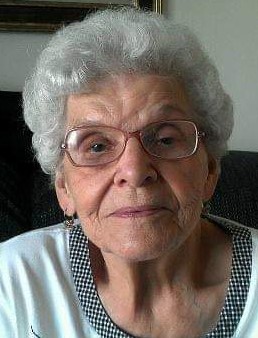 Mrs. Hemmerling attended Frankfort High School.  She was a homemaker.  She was a longtime member St. Mary’s Catholic Church and was active in the Rosary & Altar Society.  She enjoyed cards, bingo, cooking and especially loved spending time with her children, grandchildren and great grandchildren.

Visitation will be Wednesday, June 26, 2019 from 5-7:30 p.m., with a Rosary to follow at Goodwin Funeral Home, 200 S. Main St., Frankfort. Mass of Christian Burial will be 11 a.m. Thursday, June 27, 2019 at St. Mary’s Catholic Church, 600 S. Mary’s Ave., Frankfort. Mass will be celebrated by Father Chris Miller. Interment will follow in Green Lawn Memorial Park. Memorial donations may be made to St. Mary’s Catholic Church.

In addition to her parents and her husband, she was preceded in death by 2 sons, Steven & Peter Hemmerling, sister, Janet Douglas, brother, Harold Hill and half-brother, Howard Hill.