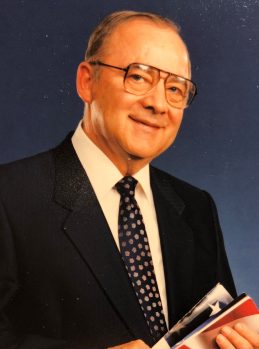 Harold graduated from Rossville High School in 1951, then enlisted in the US Navy, serving during the Korean War. After honorable discharge, Harold joined the Frankfort Police Department, where he served two terms as Chief of Police (1968-1971, & 1976-1979) before retiring after 20 years of service. During his tenure with Frankfort Police, Harold was a 1971 graduate from the 88th Session the prestigious Federal Bureau of Investigation National Academy (FBINA), where he holds the unique distinction of being the last FBINA graduate to receive their diploma from famed FBI Director J. Edgar Hoover.

After retirement, Harold started his own business in Richmond, IN, manufacturing corrugated plastic items. In 1991, Harold was elected Mayor of Frankfort, where he won every voting precinct in the city. Harold served the citizens of Frankfort as Mayor for two terms from 1992-1999, when he retired from public office. Upon retirement, Harold remained active in the community, advising Frankfort Mayor’s even into 2021, and serving on the Board of Directors of the Retired Indiana Public Employees Association (RIPEA) from 2000-2021.

Friends may visit 10:30 a.m. – 2 p.m. Friday, May 21, 2021 at Goodwin Funeral Home, 200 S. Main Street, Frankfort. Funeral service will begin at 2 p.m. Friday at the funeral home. Entombment with Military Honors will be in the Clinton County Mausoleum in Green Lawn Memorial Park, Frankfort. Pastor Gordon Smith will officiate. Memorial donations may be made at the Frankfort First Church of the Nazarene, 2056 E. Wabash St, Frankfort, or by calling the church at (765)-654-6387. The family ask that those attending the visitation and service to please wear a mask.

Harold is survived by wife Virginia, of Frankfort, daughter Debra (John) Marxer of Michigan, sons Gary of Indianapolis, and Kirk of Frankfort, along with brother Cleo (Betty) of Florida, 2 grandchildren, and 2 great-grandchildren.

He was preceded in death by his parents, brothers Clint, Kenneth, Fred, and sisters Wilma, Glenda, Sally.