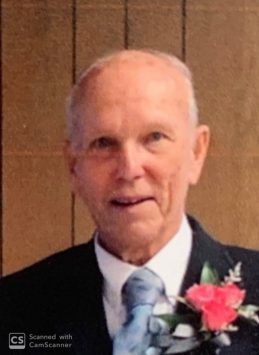 Gilbert “Max” Donoho, child of God, world traveler, lifelong Frankfort resident, son, brother, husband, father, grandfather, proud veteran, and friend, finished his life’s journey in the arms of God, surrounded by his loving family on Sunday evening, March 15, 2020.  Max’s journey began as the fourth child born to Gearold and Anna Bell (Wheeler) Donoho on Halloween Eve 1926.  As with many depression era families, the boys were expected to help support their families.  Following the completion of the 8th grade, Max joined the workforce doing whatever possible to contribute to the family.  World War II saw Max as a member of the United States Army serving two years as part of the occupational force on the Isle of Japan.

Following his return to Frankfort after the War, Max met and married Carolyn “Jean” Baker.  Their marriage produced three children.  After the completion of his apprenticeship with Nickel Plate Railroad, Max went to work for Allison in Indianapolis.  Over the next thirty-six years, Max, the master craftsman, built one of a kind pieces used in this country’s space, military, and civilian aviation endeavors.  Max and Jean were happily married for 63 years, traveling widely to see the wonderful world outside the Midwest. Jean’s death left a void in Max’s heart.  Life goes on and turned a new page when Max renewed an old friendship with Mildred Leonard.  Max and Mildred married on September 8, 2012 and she survives.

Memorial donations may be made to Mooseheart International, 120 Ohio Road, Mooseheart, IL  60539.

The family has decided to conduct only private family services to avoid the risk of inadvertently spreading the COVID19 virus to family and friends.  Goodwin Funeral Home, 200 S. Main Street, Frankfort is honored to assist the Donoho family.