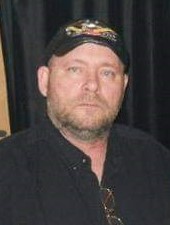 Gary L. Kersey, 62, of Michigantown, died March 29, 2021 at Clinton House Health and Rehabilitation in Frankfort, Ind.  He was born on April 25, 1958 in Indianapolis to Ronald Oliver Kersey and Marcille E. (Sigmond) Cole.  He married Christina Crum on February 5, 1999 and she survives.

Gary attended Westfield High School where he was a member of the wrestling team.  He earned his GED and served in the United States Navy and the United States Army.  Gary was a truckdriver.  He was a musician who loved to write music.  He enjoyed working on guitars, and tinkering on computers.

Memorial donations may be made in Gary’s honor to the Clinton County Humane Society, P.O. Box 455, Frankfort, IN  46041.

A Celebration of Life will begin at 5 p.m. Thursday, April 8, 2021 at Goodwin Funeral Home, 200 S. Main Street, Frankfort.  Friends may visit 4 p.m. until the time of service at 5 p.m. at the funeral home.  Out of respect for the health, safety, and comfort of all in attendance, guests will be expected to adhere to current CDC guidelines regarding appropriate social distancing and the wearing of masks.

He was preceded in death by his father and step father, Steve Cole.