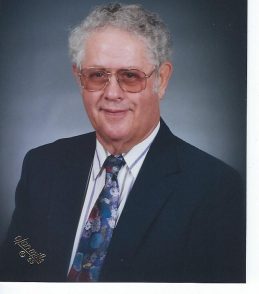 Forrest Dale Spencer, 89, of Colfax passed away at 9:00 p.m. on February 8, 2020.  He was in hospice care at Westminster Village, West Lafayette, Ind.   He was born December 1930 to the late Merle Joseph Spencer and Lucille Opal (Bogan) Spencer who later divorced.  Lucille then married Gaylord F. Waddell, who helped rear Forrest.  He married Patricia A. Bradshaw in Colfax on August 23, 1953 and she survives.

Forrest was an avid antique car enthusiast and won many trophies and plaques.  His ’46 Ford (Clifford), ’49 Chrysler and ’63 T-Bird were his pride and joy.  He was an Alcoa retiree having worked there for 38 years.  He was a member of the Colfax Christian Church having served as Sunday School teacher, deacon and elder.  He had also served as a board member for the Christian Student Fellowship of Indiana State University in Terre Haute.  Forrest was a 1950 graduate of Clarks Hill High School.  He was a veteran of the Korean Conflict (1950-53), where Forrest attained the rank of Corporal.  Forrest also held memberships in the Alcoa Retiree’s Club and LIHAC (Lafayette Indiana Historic Auto Club).

Memorial donations may be made to the Christian Student Fellowship, 732 N. 5th St., Terre Haute, Indiana 47807 or the Colfax Christian Church.  The family wishes to express deep gratitude to the Franciscan Hospice staff along with the caring staff and nurses at Westminster Village for the loving care he received these past three weeks.

He was predeceased by a daughter, Christine K. Sheets in 1994.