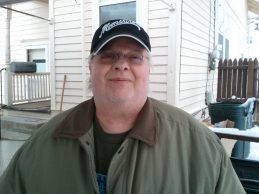 Chris is a 1974 graduate of Frankfort Senior High School and completed two years of computer programming at Indiana Business College.  He worked for over 20 years for UN Rohn in Frankfort, 5 years at Cover IT in Connecticut and retired from Dynamic Metals in New Jersey in August, 2013 where he was a Steel Tube Mill Manager.  He was a member of First Church of the Nazarene and New Life in Christ Ministries both in Frankfort.  He loved music, especially “Classic Rock” and played the guitar, harmonica, and piano.  He also loved all animals and enjoyed gold prospecting.

A funeral service will be 1:30 p.m. Thursday, December 21, 2017 at Goodwin Funeral Home, 200 S. Main St., Frankfort, Ind.  Visiting will be at 4-7 p.m. Wednesday, December 20th at the funeral home.  Pastor Robert Palmer will officiate the service.  Burial will follow in Green Lawn Memorial Park in Frankfort.

He was preceded in death by his three parents and his brother:  John A. Heise.