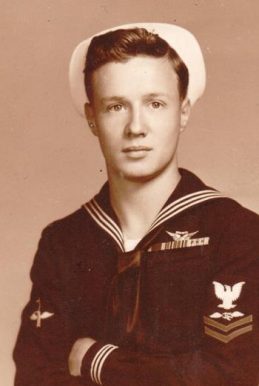 Service, faith, career, and family were defining elements in the life of Frankfort native Charles W. Hackett, universally known as “Chick,” who died on January 10 at the age of 93 years.

In 1950, Chick graduated from Franklin College and that same year he married his Franklin College sweetheart Pauline (always called Polly). That marriage was the highlight of his life; Chick and Polly celebrated 67 years of marriage this past December. Always active in civic and school matters, Chick and Polly formed a strong team and were supportive of each other’s independent endeavors. They were also active bridge and euchre players, hosting and attending card parties wherever they lived.

On Sunday mornings he could be found in a pew at a United Methodist Church in the cities in which he lived and on Sunday afternoons he could often be found back at church providing volunteer help painting, cleaning, or doing other maintenance.

Chick enjoyed a 38-year career with the Nickel Plate Road and its successors, mostly as a traveling traffic agent. His railroad career began in Indianapolis and took him to Fort Wayne and to Green Bay and Milwaukee, Wisconsin. Shortly after his retirement from Nickel Plate successor Norfolk Southern, Chick and Polly returned to Frankfort to make a new life in his old home. He remained active in railroad affairs, volunteering at the Linden Depot Museum.

A 1942 graduate of Frankfort High School, Chick entered the US Navy in 1943. He served during the Second World War on the carrier Yorktown (CV-10) in the Pacific theater, facing combat as radioman and ventral gunner on a carrier-based torpedo bomber at Chichi Jima, Guam, Iwo Jima, and Yap. He received four battle stars and an air medal and his unit received a presidential citation.  In later life, he was active in the association of Yorktown veterans.

Chick was a gifted storyteller and gathered material in the Navy and during years on the road for the railroad. Life in Frankfort was a staple of his repertoire and was featured in stories of a high school classmate who could fling a bowling ball the length of the lane in the air, of the dubious reliability of a first car, adventures with his older brother Bill, and of the post-war T Bowl pickup football game. A carrier of the Frankfort Times in his youth, Chick retained a keen interest in conversations about news and current events throughout his life.

Funeral services will be 3 p.m. Saturday, January 20, 2018 at Goodwin Funeral Home, 200 S. Main St., Frankfort. Jake Fisher will officiate. Visiting will be 1-3 p.m. prior to the service at the funeral home. Burial will be in Helt’s Prairie Cemetery, Hillsdale, Ind. For those interested in making a memorial gift, Chick’s family notes his interest in the Make-A-Wish foundation; Make-A-Wish® America, Gift Processing, 4742 North 24th Street, Suite 400, Phoenix, AZ 85016 and devotion to St. Matthew United Methodist Church, 1951 Wilshire Dr., Frankfort, IN 46041.

He was preceded in death by his parents, Donald and Gertrude (Baker) Hackett and by his brother D. William Hackett (Barbara), who, like Chick, was a graduate of Frankfort High School and a veteran of the US Navy.