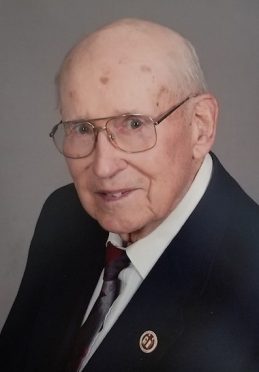 Carroll Cletus Johnson, 99, of rural Frankfort left this life on June 29, 2021 at I.U. Health Arnett Hospital, Lafayette, Ind.  Carroll was born on a farm that was called Johnson Road at that time and is now called North Union Road to Herman and Lena Culbertson Johnson on August 17, 1921.

He was a 1939 graduate of Frankfort High School and had belonged to Troop 38 of the Boy Scouts, attaining the rank of Junior Assistant Scout Master.

Carroll served as the Union Township Boys 4-H Leader for 3 years and as a director at Bunnell Cemetery for several years.  He was a life member of the American Legion Post #12 in Frankfort for over 73 years, a member of the Clinton County Antique Tractor Club, and had been a member of the First Evangelical Presbyterian Church since 1933, where he had served as a deacon and elder.

On November 9, 1942 he was sworn into the United States Army and served in North Africa in 1943 and on the Anzio Beachhead in the spring of 1944.  On August 15, 1944, while serving in the 141 Field Artillery, he involved in the invasion of southern France.  On May 8, 1945 when the war in Europe ended, Carroll was in southern Germany.  After his discharge from the army on September 30, 1945 he returned to the farm and was the 4th generation of Johnsons to farm it.

Memorial Donations may be may be made in Carroll’s honor to the Clinton County Boy Scouts or the First Evangelical Presbyterian Church.

Surviving are his 3 nieces, Janilyn (Jim) Need of Frankfort, Jerilyn (Junior) Geiger of Columbia City and Karla (Chip) Combs of Barrington, Illinois and 1 nephew Jerry Lee (Pat) Ostler of rural Frankfort.   He is also survived by 2 cousins, Carolyn Johnson Korb of St. Louis and Susan Klepinger of Elkhart, Indiana.   He is also survived by his more or less adopted family Pam and Mike Hensley and their sons Chris and Chad.

In addition to his wives, he was preceded in death by 2 brothers and 3 sisters.