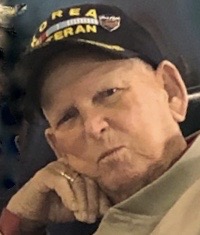 Joe Bill attended Frankfort Schools and lived most of his life in Clinton County.  A veteran of the U.S. Army, he served in Japan and Korea and received the Purple Heart.  He worked for Hinshaw Roofing for over 40 years.  He recently received his 65-year pin for being in the Roofers Union Local 119.  Joe Bill attended the First Church of the Nazarene. He was a member of the VFW, American Legion and former member of Eagles.  He enjoyed buying, selling and trading and visiting Strawtown.

Graveside services will be 2 p.m. Friday, March 27, 2020 at Bunnell Cemetery. Memorial donations may be made to the Guardian Angel Hospice or First Church of the Nazarene.