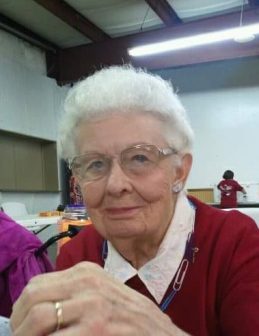 Betty Lou Trees, 92, a lifelong Clinton County resident, died December 19, 2018 at Wesley Manor in Frankfort, Indiana.  She was born April 17, 1926 in Frankfort, Ind. to Ira William Rice and Elizabeth E. (Leighty) Rice.  She married Paul Franklin Trees on December 9, 1945 and he preceded her in death on October 9, 2001.  She was a 1944 graduate of Frankfort High School and attended the American Academy of Art in Chicago.  Betty worked as a window designer at Thrashers Department Store in Frankfort, was a farm wife and homemaker.  She formerly attended Hope United Methodist Church, Michigantown Christian Church.  Betty was the chairman for the Clinton County Cancer Fund for over 30 years.  She was a member of the Michigantown Community Club and was bestowed the honor of “Clinton County GEM” in 2008 for generously sharing her time and talents through volunteering and serving Clinton County.  The Century Farm Award was awarded to Betty and her family in August of 2012 by the state of Indiana.  Betty enjoyed painting, was an avid card player especially bridge and euchre.

Visitation will be from 9 – 11 a.m. on Saturday, December 22, 2018 followed by Funeral Services at 11 a.m. at the Wesley Manor Chapel, 1555 N. Main St., Frankfort, Ind. Ron Trees will officiate. Burial will be in Bunnell Cemetery, Frankfort, Ind. In lieu of flowers, memorial donations may be made to the Clinton County Cancer Fund, 241 S. Broad Way St., Frankfort, Ind.

In addition to her parents and spouse, she was preceded in death by infant son Phillip Floyd Trees.