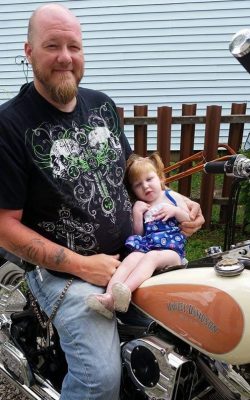 AJ grew up in Frankfort.  He attended Frankfort schools and later earned his GED.  He was a truck driver for Tyson Foods and had worked for Warsaw Chemical.  He attended Faith Family Ministries in Frankfort and enjoyed his kids, riding his Harley, playing guitar, and cooking.  AJ had a heart of gold and would help anyone at any time.

Memorial Services will be held at 3 p.m. Monday, April 26, 2021 at Goodwin Funeral Home, 200 S. Main Street, Frankfort. Pastor Mark Mowery will officiate. Friends may visit from 2 p.m. until the time of service at 3 p.m. at the funeral home. Burial will follow in Green Lawn Memorial Park, Frankfort. Following the burial, all family and friends are invited to a dinner and time of fellowship at “THE OLD GRAY BARN” 6600 N. CR 0 EW. Frankfort, IN. Out of respect for the health, safety, and comfort of all in attendance, guests will be expected to adhere to current CDC guidelines regarding appropriate social distancing and the wearing of masks. Memorial Donations may be made to Goodwin Funeral Home to assist the family with final expenses.

Please complete the information below to make a donation in honor of Arthur “AJ” Peterson.