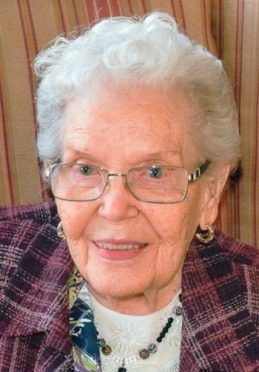 Alice Steiner Skaggs has passed to God’s Kingdom on November 16, 2017 at the age of 99.  Alice Grace Young was born on a farm in Clinton County in 1918 to Grace Ayers Young and Lee A. Young, and was the youngest child.  She had three brothers, Arnel, Jesse and Fred and one sister, Francis (Ticen).

Alice’s family were farmers.  She grew up and was raised on farms in Geetingsville, Rossville and Frankfort, Ind.  Soon after graduating from Frankfort High School, Alice met Fred Steiner of Lafayette.  They were married New Year’s Eve, 1939 in the First Presbyterian Church, Frankfort.  She and Fred settled in Frankfort, Ind, living with Alice’s mother.  There they had a small track farm where they sold vegetables and chickens.  Fred worked at Nickle Plate Railroad as a foreman in the car department his whole working career.  Fred passed away in 1966.  From this marriage, she leaves behind two sons; Jon Frederick (Joan C.) and Stephan Ayers (Arlene), grandchildren; Jeff Steiner, James Steiner, Jason Steiner, Justin Steiner, Michelle Harrold (Patrick), all of Indiana, Scott Steiner (Michelle) of Florida, Stephanie Steiner of Indiana, who will miss the closeness and love of their grandmother.  Her great grandchildren; Michael Harrold, Nickolas Harrold, Jaylon Steiner, Joshua Steiner, Allison Steiner and Emily Steiner.

In 1973 she married Robert Skaggs.  Alice and Robert lived on a farm outside of Michigantown, Ind.  There they were members of the Michigantown Christian Church.  She had several step-children, grandchildren, and great grandchildren through this marriage.

In 1998 Robert passed, she sold the farm, and moved to the Lutheran Village in Mulberry, Ind.  After a few years, Alice moved to the Golden Years in Fort Wayne, Ind.  She lived there until her passing.

Alice was a devoted mother and was active in the community.  She worked for the Clinton County Fair Board, was a republican precinct chairwoman, Kyger School PTA member, was employed by Mallory, Stark and Wetzel and worked in the Clinton County Clerk’s Office.  Later, when she was in her 60’s, she pursued a career as a caregiver.  She received her degree from Indiana University.  Alice was passionate about caring for others, always ready with a loving hug, kind words and a big smile.  Everyone that Alice touched loved her.

A large part of Alice’s life was her devotion to Jesus Christ.  On a daily basis she listened and read God’s word.  Her interaction with her family gave her immense joy and satisfaction.  Alice enjoyed writing cards to friends, had a real fondness of the computer and internet (in her 80’s she took a course at Purdue University about programming computers), and of course she was always up for a good game of Euchre.

Alice was devoted to the word of Jesus Christ.  Throughout her life she read and put to practice the teachings of Jesus Christ.  She always had a strong faith in the Lord’s word and lived a life reflecting his message.  She undoubtedly is in the presence of Jesus Christ at this time.