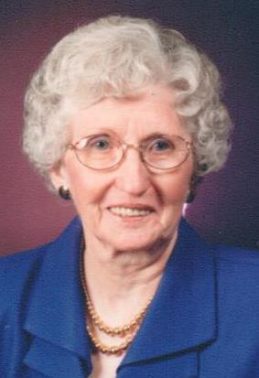 Aileen was a 1948 graduate of New Ross High School.  She worked at the Clinton County Courthouse in the License Branch-BMV, as well as in the County Clerk and Auditor Offices.   Aileen served 23 years in the  Farmers Bank Credit Department until her retirement in 1995.  She was an active member of the Antioch Church for many decades and served as a choir member, Hope Class treasurer, and Memorial Fund manager. Aileen volunteered for many hours and years as a Clinton County Hospital Pink Lady, as a precinct election official, and with the Salvation Army. She frequently was a blood donor. Aileen loved her Purdue Boilermakers and family gatherings and celebrations.

A funeral service celebrating Aileen’s life will be held at 10:30 a.m. on Wednesday, July 24, 2019 at Goodwin Funeral Home, 200 S. Main St., Frankfort, Ind. Burial will follow in New Ross Cemetery. A visitation will take place on Tuesday, July 23,, 2019 from 4-7 p.m. at the funeral home. In lieu of flowers, memorial donations may be made to The Salvation Army of Frankfort, Indiana.

In addition to her parents and spouses, she was preceded in death by 2 sons: Gregory Pullen and Garry Pullen, 2 brothers: Harold Williams and Howard Williams, 2 sisters: Blanche Evans and Helen Williamson, a daughter-in-law: Beverly Pullen, and a step daughter-in-law: Angelina Young.