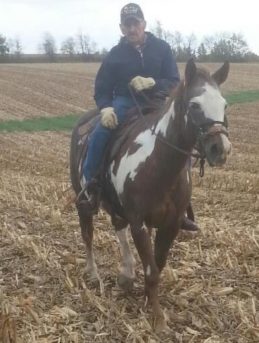 Adrian Paul “AP” Nelson, 91, of Frankfort, passed away at Wesley Manor on April 30, 2020.  He was born May 9, 1928 in Dickson, Tennessee to William Thomas and Bradley Linnie (Foster) Nelson.  He married Patricia Anne Leininger on September 24, 1961 and she survives.

AP served during the Korean War prior to beginning work for Indiana Bell.  He retired after 34 years, but continued to work many part-time jobs until the age of 85.  He was a longtime attendee of Oakland Christian Church and Antioch Church, and along with that was a steady member of both the Carroll County and Clinton County Jail Ministries.  He was a self-taught mechanic specializing in lawn tractors and antique cars.  He also enjoyed time playing his guitar, but most of all was an avid horseman through and through, with Maggie being his pride and joy for 20 years.

A private family gathering will be held. Memorial donations may be made to Special Olympics of Clinton County or Antioch Church Building Fund. Burial will be in the Veterans Section of Green Lawn Memorial Park.

He is survived by his wife: Patricia A. Nelson of Frankfort, daughter: Pam (Dean) Huddleston of Frankfort, son: John Nelson of Fishers, 3 Grandchildren: Morgan (David) Hutsell, Kenzie (Caleb) Harris (who was her grandparents’ caretaker for 2 ½ years) and Grant Nelson, as well as 3 great grandsons, Gavin, Trenton and Chandler.

Paul was preceded in death by his 8 older siblings.